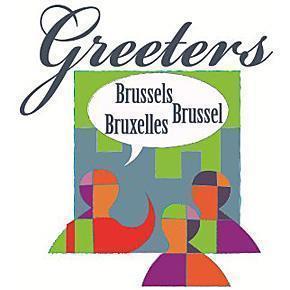 Discovering Molenbeek with the Brussels Greeters

Our mission is to get expats and Belgians alike to discover as much of Belgium as possible, so when we were asked to explore a corner of Brussels with a local, we jumped at the chance. Despite the chilly weather, we spent an interesting afternoon learning all about Molenbeek courtesy of the Brussels Greeters.

When I first heard about the Brussels Greeters, I knew this was our kind of organization. This group of more than 100 volunteers, of all ages and backgrounds, shares local knowledge with visitors and new-comers.

These are not your typical umbrella wielding, fanny-pack wearing, group tours. For starters, the groups are kept small, for maximum interaction. No more than six people are on tour at any one time. Second, Brussels Greeters tours cover all topics and neighbourhoods of the city. Of course, you can have a tour of the Grand Place with a historian, but how about a tour of lesser-known Schaerbeek or Laeken?

Greeters have backgrounds and interests ranging from street art to environmentalism. Whether your interest is nature, gastronomy, architecture, shopping, history, or family activities, there really is a tour for everyone.

Language isn’t an obstacle either. At the moment, Brussels Greeters volunteers speak 12 languages, including sign language.

But the best thing about the Brussels Greeters is the tours are completely free of charge. In fact, not even tipping is permitted, to encourage the free-flowing exchange of ideas.

We’re always encouraging people to get out of their neighbourhood routines and visit new corners of Belgium. After almost eight years in Belgium, we still haven’t run out of new places to visit. In fact there are still plenty of areas of Brussels we know little about. So, to practice what we preach, I asked the Brussels Greeter coordinator, the fabulous Emilie, to send us to a part of Brussels we were less familiar with.

That’s how, on a cold and snowy Sunday afternoon, we found ourselves following Jan, a graphic designer and passionate Bruxellois, through his neighbourhood of Sint-Jans Molenbeek.

We met Jan in front of the church on Place Sainte-Catherine, a place I have been countless times. Even before we set off on our tour, I learned something new. It seems the church was designed in 1854 by Joseph Poelaert, the same architect who designed the Palace du Justice. It was built to replace the 17th century church, whose tower still remains on the square. 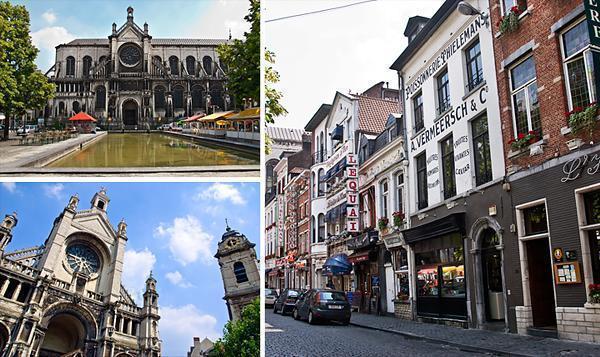 Place Sainte Catherine was once part of the busy port of Brussels.

We set off through the fish market as Jan told us all about the old port of Brussels, once located right where we stood. Jan brought these historical images to life and we could actually picture the boats unloading the cargo onto the quays. If you’ve ever wondered why so many of the streets in this area are named after food or goods, it’s because ships unloaded that particular cargo there. Fascinating!

As we strolled towards the canal, Jan talked about the redevelopment of the area, his background in art and design and his interest in urban living. Most of all, we shared a passion for Brussels, foibles and all.

While we followed Jan, Andrew filmed a little video of our adventure.

Crossing over the bridge, we found ourselves at our destination, Molenbeek Saint-Jean or Sint-Jans-Molenbeek.

This is where my own knowledge of Brussels gets fuzzy. My main reason for heading to Molenbeek is to stock up at my favourite Indian grocery store, the Ideal Cash and Carry. Beyond that, I know little about this Brussels commune.

Molenbeek has a lot in common with our own commune of St.Josse. Both are densely packed, home to immigrants, and have a reputation among many Belgians as scary neighbourhoods to visit (“You live in St. Josse?! Really? Why?”).  It’s true, both communes have their issues, brought on by high unemployment, clashes of culture and over-crowding, but that’s no reason not to visit.

Wandering the streets of Molenbeek, you’re confronted head-on with Brussels’ growing issue of immigration and expansion. It’s hard to ignore the fact many of these streets feel more at home in Morocco or Turkey. We believe diversity is Brussels’ greatest asset, but we also know there are major challenges in accommodating so many distinct cultures and beliefs.

As Jan led us through his neighbourhood, we discussed all of these issues and more. (If only the top-brass would let us solve the world’s problems…) Along the way we spotted some hidden gems, I had never even heard of before.

Most striking, was the church of Saint John the Baptist (Sint-Jan Baptist). This Art Deco style church is one of those buildings that falls into the ‘love it or hate it’ category. Always a fan of the quirky, I rather love it. 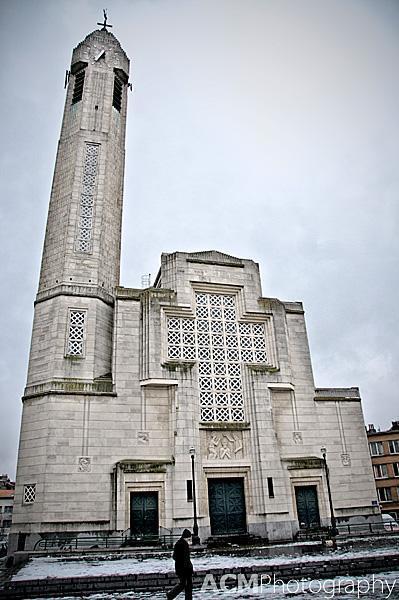 Of course, we did pass some architecture which left us shaking our heads. While I appreciate modern architecture that integrates with traditional styles, this building receives a big FAIL from the CheeseWeb crew. What the heck were they thinking?

By the end of our tour we had thoroughly explored a new corner of Brussels, had lively discussions about culture, architecture and politics and enjoyed being tourists in a city we’ve called home for eight years. I’d say that was definitely worth the price of admission…

If there’s part of Brussels you’d like to learn more about, contact the Brussels Greeters through their website (They ask for two weeks’ notice before you visit the city, to coordinate your free tour). If you’re new in town or you’ve been here for years, like us, there is still plenty to learn about this fascinating city.

You don’t have to limit yourself to Brussels either. Greeters’ chapters are now operating in Verviers, Mons, Charleroi and Namur. The Brussels Greeters are even part of the Global Greeter Network, with chapters from Adelaide to Zagreb. We will definitely be learning more from Greeters around Belgium and the rest of the world, in the future.

Calling New Greeters! Are you passionate about your corner of Brussels? The Brussels Greeters are looking for volunteers who are available through the week and speak a variety of languages (Spanish, Russian  German, French and/or English). On average, Greeters volunteer to give 15 tours a year.  Contact Emilie at Tourisme Autrement, for more information.