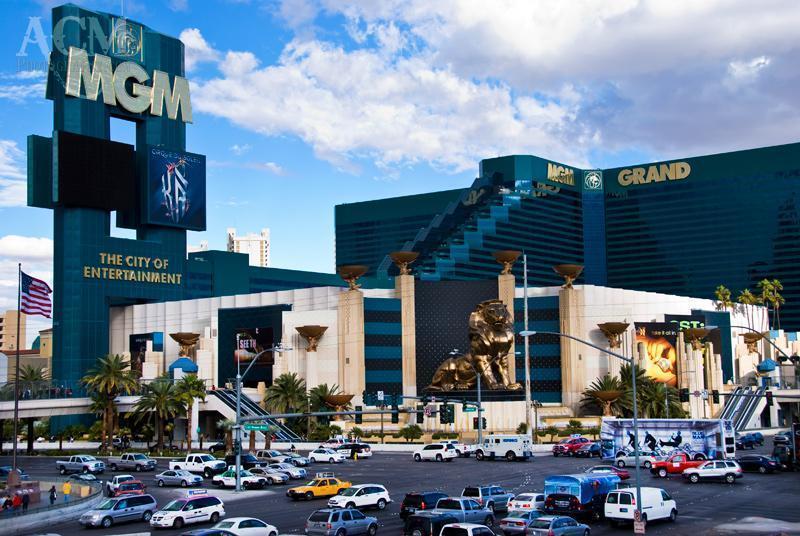 The last half of our Vegas visit was as good as the first half and included just as much good food.

On Thursday night, I tagged along with Andrew and some of his work colleagues for supper at Shibuya, a Japanese restaurant at the MGM Grand. Although, not quite as good as Okada, it was one of the better meals we had at the Grand.

Still on the topic of food (of course), since I was left to my own devices for lunch most days, I explored a few of the other options on offer at the Grand, and there are many. I was never far from a cup of coffee, with at least three Starbuck’s in the Grand alone. There was also the ubiquitous Food Court complete with McD’s, take-away Chinese and a hot dog stand among others.

Since I was blowing my calorie budgets on evening meals, I tried to be a bit healthier for lunch. I was pleasantly surprised by the Wolfgang Puck restaurant in the Grand. Andrew and I had been joking that Puck seems to be everywhere these days, including several of the airports we flew through. On the whole though, the food I had there was good, fresh and reasonably priced.

My biggest letdown of the week was Emeril Lagasse’s restaurant at the Grand. Although I expected some spicy Cajun goodness, my sandwich was pretty bland and definitely had no “Bam!” It could have been what I ordered, but I was less than thrilled with my meal.

My best lunch find, unfortunately at the end of the week, was ‘Wichcraft a sandwich shop run by Tom Colicchio, one of the hosts of Top Chef. I had hoped to get to his Craftsteak restaurant, also in the Grand, but we didn’t have time. ‘Wiichcraft, however, offered a dizzying array of hot and cold sandwiches made on the spot with fresh ingredients. Delish!

One of the MGM Grand Lions

On Friday, Andrew was finished at noon. We decided to catch a cab to a shopping centre not far from the strip. Andrew was in search of cheap electronics and I heard there was a Whole Foods. We both found some booty to stuff our suitcases with. (More on the suitcase debacle in a bit).

Friday was the night I had been waiting for. Although, at least for me, the whole Vegas trip revolved around food, the one place I absolutely wanted to eat at was Bouchon, Thomas Keller’s restaurant in Vegas. Keller is the creator of the French Laundry in the California wine country which is arguably one of the top restaurants in the States right now. I know what the wait list is like for the Laundry so my chances of getting there are slim. I booked us at Bouchon the second I heard we were going to Vegas.

We dressed up and headed to the Venetian. We arrived a bit early so we decided to have a drink at the very well stocked bar. Bouchon was not quite what I expected, but not in a bad way. While in my head was the white linen, fine-dining of the Laundry, Bouchon was much more like a traditional Parisian bistro (set in the Venetian…irony?) Once we were seated, I was surprised again by the menu. The traditional French Bistro fare was much cheaper than I expected.

My Boeuf Bourguignon melted in my mouth (Julia Child would have been proud) and Andrew’s Steak Frites rivalled anything we’ve had in France. In fact, his mountain of hand-cut fries were so good, they may even have topped our favourite Belgian frites. The wine list was expensive, but our sommelier did perfectly pair a bottle with our meals and our starter of pâtés was also superb. My very high expectations were met and possibly even exceeded. My only criticism would be that the high ceilings in the restaurant make it a bit noisy, so if you are looking for an intimate date setting, this may not be a great choice. If you are looking for an authentic French bistro in Vegas (in Venice), Bouchon is the perfect choice.

Robert and Andrew at Red Rock

Saturday was a special day for us. One of the new friends we met at our Okada night, very kindly offered to take us on a tour of Red Rock Canyon. We finally had a chance to get off the Strip. We met up at lunch time and Robert took us to In and Out Burger – an institution on the West coast. In and Out does burgers, fries and milkshakes and not much else. They do these things much better than modern drive-throughs and we agreed with their “best burger” nomination.

Fuelled and ready, we headed to Red Rock. It was stunning. I wish my photos did it justice, but the bright noon-time sun didn’t lend itself to photography. We drove around the loop of the canyon, stopping at several points to hike into the bright red and orange rocks. It was gorgeous, and hard to believe it’s a 20-minute journey from the Strip.

Once we were dropped off at our hotel, we decided to grab supper at the Grand and call it an early night (the morning would come VERY early the next day). We ate at Diego, the Mexican restaurant at the Grand. It was good. The chips and home-made guacamole and salsa were very well done and my chicken mole was quite nice. It still didn’t top our Amsterdam staple, Los Pilones, though.

Our flight the next day was incredibly long but uneventful. We had a great view of the Grand Canyon (we’ll go next time) as we flew over. It wasn’t until the next day (after sleeping almost 24 hours) when I was unpacking that I discovered a problem. I found notes in our bags that our suitcases had been searched. This in itself doesn’t bother me much. I have nothing to hide and if someone really wants to rifle through my laundry, so be it. However, the bottles of salsa that I bought at Whole Foods and carefully packed in zip-lock bags and shoved inside my boots were removed from both boots and bags and just tossed into the suitcase wherever. The computer bits that Andrew purchased and I carefully packed, wrapped in sweaters, were treated similarly. Very, very luckily for us (and frankly the TSA) everything survived the trip. Had there been a salsa explosion in my bag there would have been some irate phone calls happening.

So now it looks like Vegas could be in our future again as Andrew’s company is considering doing other conferences there. We’ll see what the future holds. For now, I just want to say a big thank you to everyone who made our week in Vegas so much fun. Andrew and I have been very fortunate in our travels to meet such fantastic, giving people and we never for a second take that for granted.

Alison Cornford-Matheson
Alison Cornford-Matheson is a Canadian travel writer, author, and photographer. She is the founder of Cheeseweb.eu, a website dedicated to slow and sustainable travel, off-the-beaten-path destinations, and cultural awareness through travel. She and her husband, Andrew, are the founders of RockFort Media, committed to helping entrepreneurs tell their stories online. Alison has visited over 45 countries and, after living in Belgium for 11 years, now lives full-time in a Bigfoot motorhome named Yeti with Andrew and their well-travelled cat.
Latest posts by Alison Cornford-Matheson (see all)
Pin
Share14
Tweet
Flip
Email