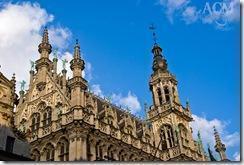 When people ask me what it is I love about living in Europe, I’m hard-pressed to put my finger on the answer. Usually I reply with a catchall phrase like the “life-style” or “quality of life.” A recent study, released by the Organization for Economic Co-Operation and Development (OECD), shows I’m not alone. Northern Europe tops the list of “Happiest Places in the World.”

In fact, all but two (Canada and New Zealand) of the top ten “happiest” countries were European. It didn’t surprise me to see Ireland, Norway and The Netherlands on the list. Once again, however, Belgium edged onto the list at number ten.

Much as I love Brussels, I have a hard time thinking of it as innately “happy.” In fact, many expats find it pretty hard to break into Belgian society. There is a reservedness that many find off-putting. The grey weather often seems reflected in the sombre colour choices for clothing and cars that seem to prevail here. Customer-service can be indifferent at best and down-right chilly at worst. And of course we can never forget the government bureaucracy and paperwork.

So what makes people in Belgium seem happy? For the survey, a representative sample of no more than 1000 people over age 15 were asked questions. For example:

Stats for Belgium from Forbes:

Economic health played a roll in the highest scoring countries, as did unemployment. However, as the saying goes, money isn’t everything.

The OECD data shows that another important factor is work-life balance. While Scandinavian countries boast a high GDP per capita, the average workweek in that part of the world is no more than 37 hours. In China, which got a low score of just 14.8, the workweek is 47 hours and the GDP per capita is just $3,600.

Balancing life and work is something that Belgians do well. There is a distinct separation here between home-life and work-life. The business district of Brussels is a ghost-town by 6:30 on most evenings. Although frustrating from a customer service standpoint, if a store says it closes at 6, you can expect to be herded to the door by 5:45. August is virtually dead in Belgium, with shops and businesses closed for vacations.

While the North American work-ethic is slowly making its way across the Atlantic, I hope Europeans won’t cash in their happiness for more money because a better quality of life is something that money alone can’t buy.